Sports for me was something that kept me out of trouble

Coach Core is marking the International Day of Sport for Development and Peace (IDSDP) on April 6th by supporting the launch of the ‘Open Goal’ campaign. Open Goal has been created by Coach Core and fellow members of the Sport for Development Coalition to showcase how sport and physical activity can contribute to building a fairer, more equitable and sustainable future. First and foremost, Open Goal will see the Coalition call on UK Government to ringfence funding committed for jobs, health and tackling crime towards targeted sport-based interventions that can save public money and generate multiple returns on investment, from improving the physical and mental health of individuals facing disadvantage and discrimination, to increasing educational attainment and the ability to secure employment.

Blessing’s story is a perfect example…

Blessing is a Coach Core apprentice with Sport 4 Life, an organisation based in the West Midlands that wants help young people move into 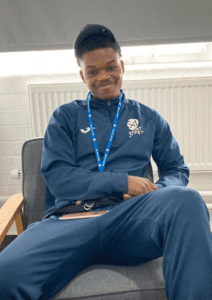 “My organisation works with kids from disadvantaged backgrounds, running mentoring, sports programmes and summer camps for them, to keep them out of trouble. We also work with unemployed adults who are in a tough spot, we offer them mentoring and interview prep to help them get a job.

My role is a coach – I run the sports sessions for both the kids and the adults. Sometimes I go into schools and do sessions with the kids there too. I also do admin work: registers, making sure we’re keeping track of our stats to show our impact in the community.”

For Blessing, football was his main focus through his teenage years – something he credits with keeping him out of trouble:

“From a young age I was just so busy with sports that I didn’t have time to do what other people were doing. From Year 8 to 18, I never went to a party or drank or anything like that as I was so focused on sports. So I know that kept me away from a lot of things and just helped me to be disciplined.”

But when he was deselected from an Academy, and moved to a youth semi-pro team, he noticed that there wasn’t a lot of support:

“We didn’t get a lot of help mentally, people who had been released from academies recently. Football was so much their identity that they now didn’t know themselves. I feel if players had help mentally on how to adjust to this new environment it would have made a big difference. And also if they got more encouragement to make sure they were focusing on the education side of things it would have helped them have a lot more doors open when they finish.”

Blessing worked hard and went to University where he started volunteering for Sport 4 Life. They offered him this apprenticeship when he finished and it has opened his eyes to the grassroots aspect of sport. He’s now a lot more attentive to those who aren’t doing well at sessions, working hard to make sure they are having fun and developing their confidence. The course has also helped him develop his skills:

“I feel like I’ve become a better coach, to be fair. Most of my coaching techniques were just from experience, I just picked up certain things that other coaches did. I feel like the Coach Core apprenticeship has made me more technical, like ‘ok, why am I doing this warm-up and what am I trying to achieve?’ And making sure that my sessions are a lot more planned, not just throwing things in the air and hoping for the best.”

Looking to the future, Blessing wants to start a company to help other young aspiring professional footballers, particularly those who don’t make it, informed by his own experiences.

“My target audience would by young athletes recently released from football Academy programmes and are trying to get back on their feet – trying to help them mentally, basically.

I was basically in their shoes. I played for Walsall Academy and I got released when I was 16. When I was playing for the youth semi-pro team and my dad was in hospital and he was ill, that’s when it was very much difficult for me. Because he was in the hospital for a whole year, at the same time I was still having to go, to play football, go to the hospital, go home, cook, clean, sleep and then do the same thing again. It meant that I was carrying a lot of stuff by myself, and also trying to chase this football dream as well. It was quite a difficult journey. By God’s grace I got through it. But for certain people I just saw what they were going through mentally and how they were on a downward spiral. People were affected mentally by different things: you’re not the star player any more, things were going on at home or sometimes just that this is a new environment and you’re finding it hard to adjust.”

Not everyone has the strength to go through tough times and then turn around to immediately offer support to those going through the same hardship. Blessing’s story is a testament to the power of sport, and sport for development organisations to make significant positive impact on the world.

The Sport for Development Coalition launched the ‘Open Goal’ campaign to showcase how its 200-plus members specifically support a series of positive health and societal outcomes such as reducing crime and anti-social behaviour, improving health and wellbeing, and building stronger communities and social cohesion in the wake of Covid-19. To read more about the Sport for Development Coalition’s #OpenGoal campaign, click here.

Find out about becoming an Apprentice through Coach Core

Discover how hiring a Coach Core apprentice can benefit your organisation