Webinars and Zoom calls are all very well, but how do you assess a coaching session during a global pandemic?

All Coach Core apprenticeships finish with an End Point Assessment – a process that tests the apprentice’s knowledge and ability through a presentation, a panel and an assessed coaching session. In normal times the coaching assessment is done with one of the community groups the apprentice is working with – the assessor will attend a kids football club session, for example. However, with Covid-19 putting a stop to all face-to-face community sessions, apprentices approaching the end of their programme were going to be unable to complete their qualification, potentially putting their careers on hold for an indefinite period.

We were determined not to let that happen! Working with the apprentice’s tutor, the employer consortium and the assessor, Coach Core led on finding an alternative arrangement. As government rules relaxed slightly, apprentices were allowed to meet in groups, enabling them to coach each other, rather than community members. However, since the assessors were unable to travel, all sessions would have to be covered on video and since a recording could be reshot, it was agreed this would have to be livestreamed!

Some in-depth planning followed, giving consideration to streaming platforms, wi-fi access, battery life and more. Once all parties were convinced a viable solution was in place, the livestreamed assessments began. 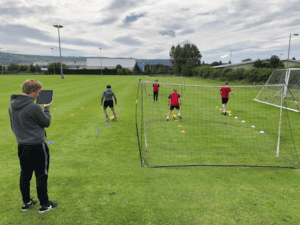 First up was Middlesbrough who found and immediately solved an unanticipated issue: when apprentices were in the middle of the field the assessor couldn’t hear them. The solution: the apprentices wear wireless headphones – complete with microphone – that are paired with filming device.

With Middlesbrough complete, and their best-practices noted, Bristol and Devon were quick to follow.

"The adapted method worked excellently for our apprentices, a really smooth and brilliantly organised method given what has happened in previous months. Was a prefect way of conducting EPA given the concerns and worries from the young people that was soon forgotten."

We are proud to say that our apprentices were the first people in the country to go through the EPA for this apprenticeship standard since Covid-19 hit, hopefully paving the way for many more to come!

“Technology has played a big part in these assessments given the adjustments that have been made due to all assessments switching to a remote format.[…] It clearly shows how your apprentices have been able to adapt and perform when the situation doesn’t always suit their preferences or indeed their strengths. I believe this to be a hugely important skill / ability for one to have.”

If you’d like to find out more about being a Coach Core apprentice, take a look here.

If you’re interested in employing a Coach Core apprentice, you can find out more here.