The Coach Core awards are our annual chance to celebrate the people and organisations who make Coach Core special and to highlight their achievements. The 2021 Awards are nearly upon us and we are pleased to announce the 3 incredibly deserving finalists selected in each category.

“Once again, our programmes have completely blown us away!  Despite the ongoing challenge of Covid-19, the standard of submissions this year was higher than ever, with young people, employers and our partners going above and beyond time and again. Their selflessness and dedication to bettering the lives of others underlined the incredible commitment to the programme we have from so many of our partners and apprentices, even when facing the most difficult of circumstances. We honestly couldn’t be prouder of everyone who was nominated.”
– Gary Laybourne, Coach Core CEO

We want to thank Lifetime Training who have made it possible for all the finalists to travel to the ceremony. This will be taking place at The Oval, 1.30pm on December 10th – and will be livestreamed to all who wish to watch:

This award celebrates a graduated Coach Core apprentice who has gone on to achieve remarkable things since their Coach Core programme. The finalists are:

Annemarie lives & works in one of the most disadvantaged areas in Newcastle. She is employed by Hat-Trick, where she did her apprenticeship, and has been developing new programmes from funding to reporting, creating big increases in local activity & volunteering levels 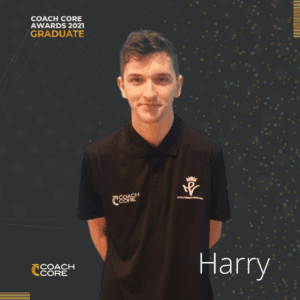 Harry has been employed by Shine, where he did his apprenticeship. He is now mentoring 1 of  their new apprentices, making sure they are supported & empowered, as well as running after school clubs, managing a junior football team, and working 1-2-1 with children with SEN 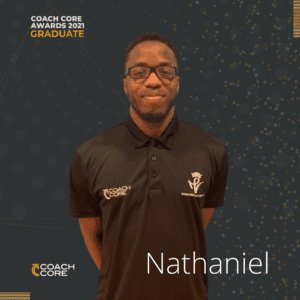 Nathaniel is also employed by Shine, where he did his apprenticeship! He has risen to a senior coaching role, and also has responsibilities running the main site. He mentors an apprentice & has created a basketball hub, which has had to put on more sessions to meet demand

This award celebrates the educator who has surpassed expectations in support of the apprentices they are teaching. The finalists are: 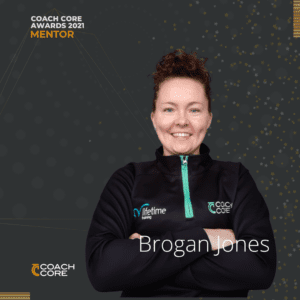 Our first programme in Leicester started & the country went immediately into lockdown. Brogan went above & beyond to ensure the apprentices stayed engaged, taking particular care over those with digital poverty, home schooling & health issues. 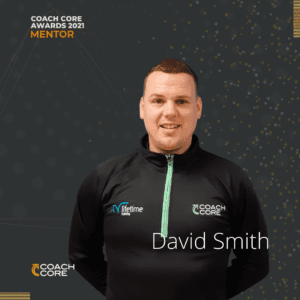 Dave has kept learning fresh for his apprentices by bringing in guest speakers and a variety of extra courses. He went beyond what was expected to bring an apprentice back onto the course after they left and his apprentices talk about how inspiring and motivating he is. 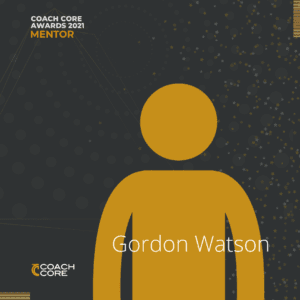 The quote “I feel that without his unwavering support & direction I would have failed this course… he helped build my confidence and enabled me to achieve my goals” sums up Gordon’s commitment to, and impact on, his apprentices.

This award celebrates someone in the Coach Core network who has made a significant contribution to our mission, has demonstrated Coach Core values and deserves to be recognised for their support and dedication to the programme. The finalists are: 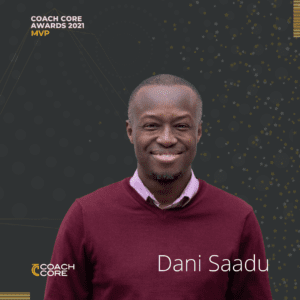 Dani is Global Director of Talent at Collinson. He invested significant time to create and lead a bespoke series of professional training courses for our apprentices during lockdown. He brings energy, care and compassion to everything he does, and a smile to everyone’s face. 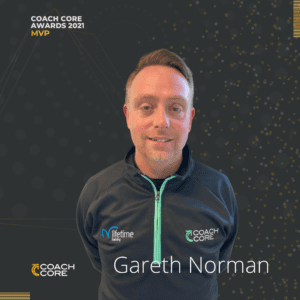 Gareth Norman works at Lifetime Training where he has gone above and beyond to support our learning coaches pivot to digital delivery, complete virtual assessments (first in country), return safely to face-to-face education and continue to drive the programme upwards and onwards. 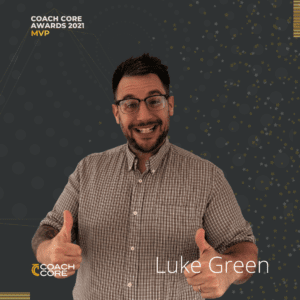 This award celebrates an individual in an organisation that employs a Coach Core apprentice who has surpassed expectations in supporting their apprentice(s). The finalists are: 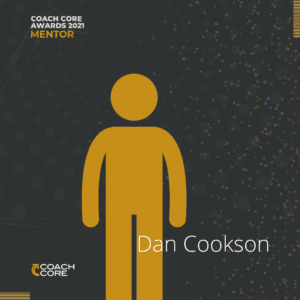 Dan, from White Rose Rugby, has been mentoring 2 apprentices and has been nurturing, patient and understanding throughout the process. He has shown himself willing to go above and beyond too, supporting one apprentice with additional needs by driving them to sessions, and spending extra time with them on their education 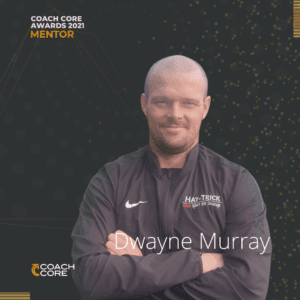 Dwayne works at Hat Trick where he has mentored two Coach Core apprentices, encouraging them to be themselves and not hold anything back. Both are now full-time employees of Hat-Trick. He is a role model not just for his apprentices, but for the community. 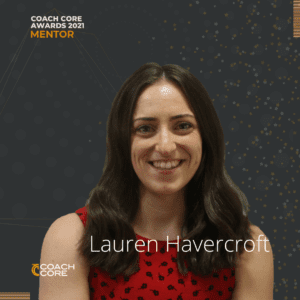 This award celebrates an organisation which embraces the Coach Core ethos and uses the benefits of partnership working to support the Coach Core apprentice(s) they employ. The finalists are:

Leicester City in the Community 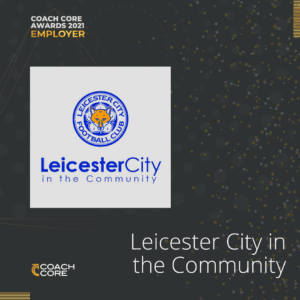 LCitC brought on (and given full-time employment) to two very different apprentices and have provided them tailored support and development, including ensuring female role models were in place to support these two young women into the sector. Further, they have supported the wider group with facilities and opportunities. 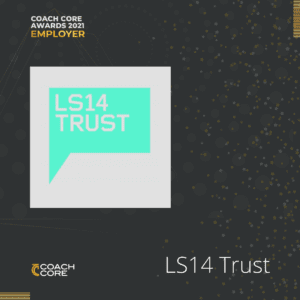 LS14 are empowering apprentices to shape their own futures, supporting one through their football qualifications and the other through youth work training as they begin to shape their preferred careers. They also provide opportunities to the other apprentices in the group. 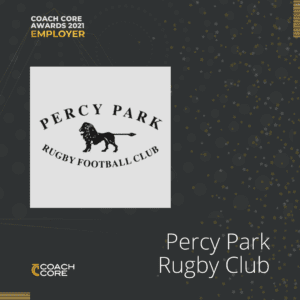 Percy park have employed their first CC apprentice and now have him mentoring their second! They provide excellent training and support, and give responsibility to their apprentices early – their first ran a festival for 90+ school kids, with the other apprentices able to come in to referee.

This award celebrates a Coach Core apprentice who has surpassed expectations in their programme. The finalists are: 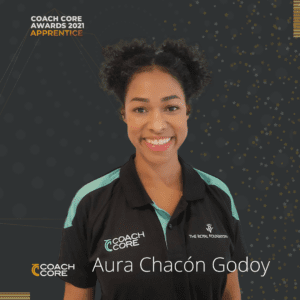 Aura started her apprenticeship at Leicestershire County Cricket Club never having played cricket before! Despite that she thrived, creating women’s engagement programmes, Zoom and walking cricket classes for the elderly and kids sessions. She is described as ‘infectiously positive’. 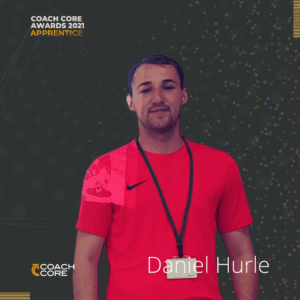 Dan is committed to creating opportunities for his community in Seacroft (where he works for LS14 Trust), successfully applying for funding to run his own projects there. He has created programmes to develop young leaders, delivered food parcels, run community days, created youtube fitness series, done radio interviews and more! 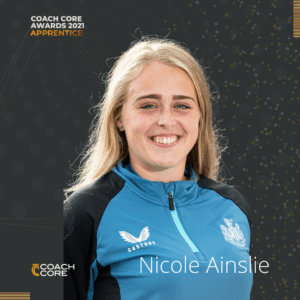 Nicole has a great understanding of the needs of diverse groups, from schools, community Kicks sessions, dementia football to specialist football coaching. She is on the committee of a local club developing the junior section and she is an amazing female role model for those she coaches.

Find out who won at the 2020 Coach Core awards

Find out more about who we are and how we work