Why less feedback is more

In this exclusive extract from their new book - 'The Best: How Elite Athletes are Made' - Tim Wigmore and Mark Williams talk about how to encourage discovery learning

As we report in our new book, ‘The Best: How Elite Athletes are Made’, at La Masia, Barcelona Football Club’s famed youth academy, coaches like to stay tight-lipped during training sessions. ‘Coaches need to limit the explicit instructions they provide, so that players are encouraged to perceive and make their own decisions’, says Isaac Guerrero, head of coaching. The aim is to encourage ‘discovery learning’.

Football is not alone. The same findings are evident in other sports such as cricket, hockey and golf. All have come to one conclusion: too much explicit feedback from coaches is counterproductive in the long-term because it fails to develop the self-learning and adaptive skills that are critical to success at the highest level in sport. Learners become dependent on that explicit feedback and are unable to function without it in future.

Yet, while scientific evidence highlighting the downsides of copious feedback provision is mounting, it seems that many coaches are not listening. Many coaches accept the mantra that continuous feedback is crucial. The problem is that coaches can observe short-term performance, but not long-term learning. What the coach sees in practice is short-term performance, whereas in order to infer long-term learning the change in behaviour seen during practice has to carry over into other practice sessions, as well as transferring to novel versions of practice, most notably to competition. So for coaches, what you see in practice is often not what you get in competition.

The optimal challenge point is the sweet spot for training. This is the point at which practice is difficult enough to push athletes to develop new skills, but not so challenging that it is completely beyond their existing capabilities. The idea was developed by the scientists Mark Guadagnoli and Tim Lee.

‘If an appropriate level of challenge is created during practice, some degree of short-term failure should occur, allowing an opportunity for growth,’ Guadagnoli explained. ‘As a general rule, if you find that someone has more success than about 70–75 per cent of the time during practice, they’re probably not being stressed appropriately.’

These findings have profound implications for coaches. Less repetitive training is better for players’ development; so is less feedback, and more demanding practice. Rather than focus on on short-term performance, coaches maintaining a longer view gives players the best chance of fulfilling their potential. 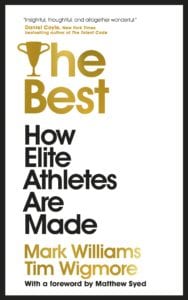 Coach Core’s work is only made possible through the support and generosity of individuals, companies, trusts and foundations.